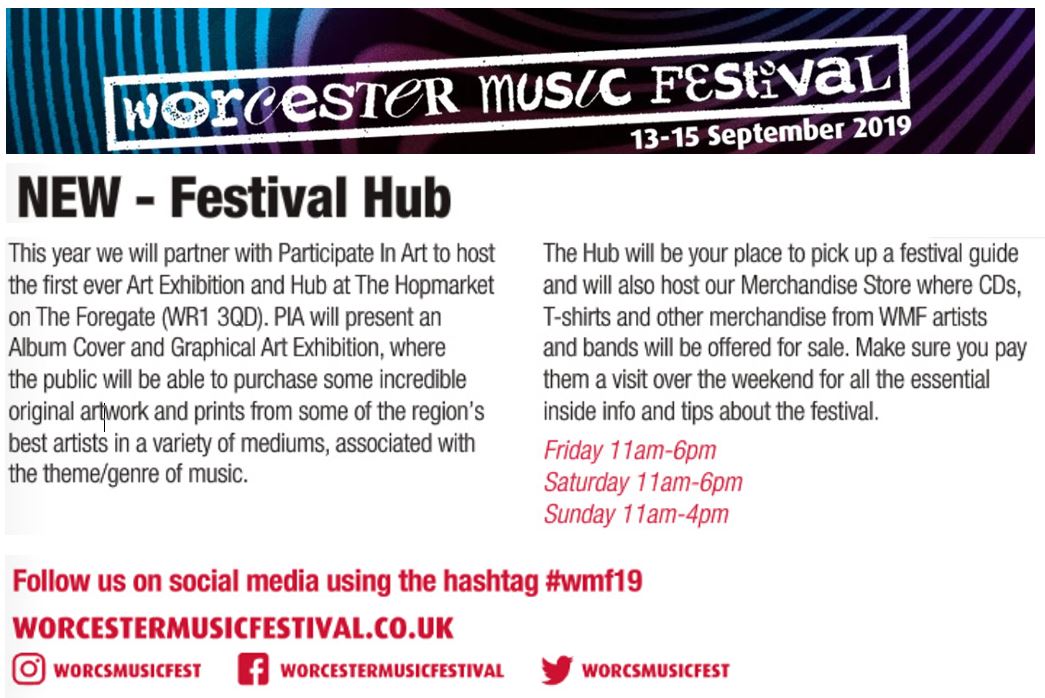 The WMF Festival Guide now out, check out page 5 for information on the PIA Festival Hub, Location ’13’ on the Venue Map.

The hub will include merchandise artists such as:

The project of singer-songwriter Tony Gillam who sings and plays guitar and mountain dulcimer, accompanied by Phil Richards on cajon and harmonica.

Original indie-folk compositions with delicate melodies, strong rhythms and often startlingly surreal lyrics. Tony and Phil came together as part of the Wyre Forest open mic scene and have previously appeared at the Worcester Music Festival.

Heinz-sight: Simon writes the songs on his guitar along with the lyrics then he and Elliot record the songs and build a wall of sound around them. Expect catchy, hooky, authentic, relatable and heart from his work and an energetic and enthusiastic live show. He has had some brilliant reviews, done some great support gigs for bigger bands and he even got a stamp of approval from Frank Turner. Frank had heard one of Simon’s songs called ‘Murder’ and really liked it. Heinz-sight’s third studio EP will be released on 16/8/18 titled Indi-structable. This will be followed by an album set for release in the summer 2019.

Electro-dance-punk / multi-media four piece offer a satirical attack on the modern world, with tracks ‘Selfie Stick Narcissistic Prick’ and ‘Twit Machine’. It’s a brilliant showcase for what they’re all about; humour, satire, and a whole lot of personality.

Initially forming when Mickey auditioned for Dolly’s solo project many years ago, Tokyo Taboo have built quite a reputation for their spectacular, character-driven – and often shocking – vibrant live performances. Now, with their debut receiving acclaim from the likes of Radio X’s John Kennedy, BBC Radio 1’s Huw Stephens, Clash and Punktastic, they’re ready to take on the world once again with the mind-blowing power of Whiskey (out Oct 4th).

Will and Weasel are a three-piece band featuring Will Lawton (piano and vocals), Weasel Howlett (drums) and Buddy Fonzarelli (bass guitar).  They formed in 2015 and release their debut album ‘Fossil of the Mind’ last year.  They will be performing songs from their next release, ‘The Abbey House Sessions’ (due out late 2019).  Their music is almost impossible to pigeon-hole and is described through reviews such as…

“There is something of the jazz approach at the core of Will and Weasel’s sound – interesting timings and intricate riffs hung on fluid, free-flowing musical structures – but there richly textured and layer music contains much more besides. Indie melodics, rock weight and progressive meanderings all add poise and power. They could be your best new find of the year…unless you have seen them already, in which case you have already made a note in the diary to be there.”

Gig Monkey – The Ocelot Magazine said “Refreshing, fascinating and exciting.  Perhaps this is what Tom O’Dell fronting Wilco would sound like if produced by Roni Size?  Regardless of how chaotic this sounds, it works. I mean it really works.”

Sourcing and delivering exposure opportunities for artists and artisans throughout the year.

Also Find Us On: